Are you ready to witness one of the biggest sensations in the pop and R&B world LIVE?? That’s right, the incredible Ariana Grande is on tour in 2019 with her new album, “Sweetener,” said by many critics to be her very best yet!! She’s hitting the Madison Square Garden on Tuesday 18th June 2019!!! Get ready for the ultimate live experience – nobody can pull off a performance quite like Ariana! Tickets expected to DISAPPEAR so don’t delay – grab yours NOW!! 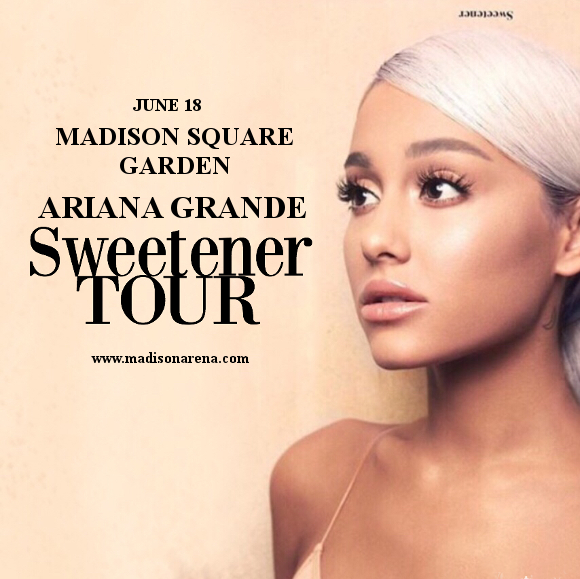 “Sweetener,” shot straight to the top of the Billboard 200 upon its release, marking Ariana Grande’s third album to do so, and topped the album charts in multiple other countries including Australia, New Zealand, and the United Kingdom. The album has blown critics away so far, with the New York Times stating that Ariana Grande’s voice "can be silky, breathy or cutting, swooping through long melismas or jabbing out short R&B phrases; it's always supple and airborne, never forced … Ms. Grande sails above any fray, past or present. Her aplomb is her triumph."

You loved “Sweetener,” but things are about to get sweeter than that! Celebrate the new album live with Ariana Grande – do you have your tickets yet?