For the second night in a row the rock powerhouse that is Bon Jovi comes to Madison Square Garden on Saturday 8th April 2017! Embarking on their first full length tour since 2013, the This House Is Not For Sale Tour, the band has a new lineup and a hot new album to promote… Something tells us this is going to be one hell of a night! 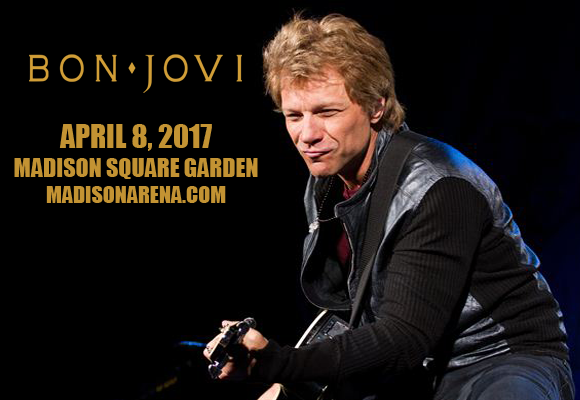 Formed in Sayreville, New Jersey, in 1983, Bon Jovi is an American rock band consisting of lead singer and namesake Jon Bon Jovi (born John Francis Bongiovi, Jr.), pianist and keyboardist David Bryan, drummer Tico Torres, lead guitarist Phil X, and bassist Hugh McDonald. Rising to fame in 1986 with their third studio album, Slippery When Wet, the band continued their commercial and critical success with their fourth studio album, New Jersey, also held its place at the top of the charts. In 2006, the band was inducted into the UK Music Hall of Fame, and received the Award of Merit at the American Music Awards in 2004. Jon Bon Jovi and the band's longtime guitarist and co-songwriter Richie Sambora were inducted into Songwriters Hall of Fame in 2009. Sambora left the band to pursue other musical directions in 2013. Bon Jovi has released 13 studio albums, plus two compilations and two live albums to date.