Seven-time Grammy Award-winning country megastar Carrie Underwood brings her Cry Pretty 360 Tour to Madison Square Garden on Wednesday 2nd October 2019! The multi-platinum-selling artist is hyped for her chance to get back on the road and connect with fans again:

“I love performing in the round,” says Underwood. “It’s so much fun for me and the band to play in every direction and creates a much more intimate and immersive experience for the audience, even in a larger arena setting. It’s been exciting to introduce audiences to Cry Pretty and I can’t wait to bring the new album to life on this tour, along with all of the songs we love to play live. I’m thrilled to be going out with an amazing line-up – Maddie & Tae and Runaway June are incredible artists that are going to bring even more electricity to our shows.” 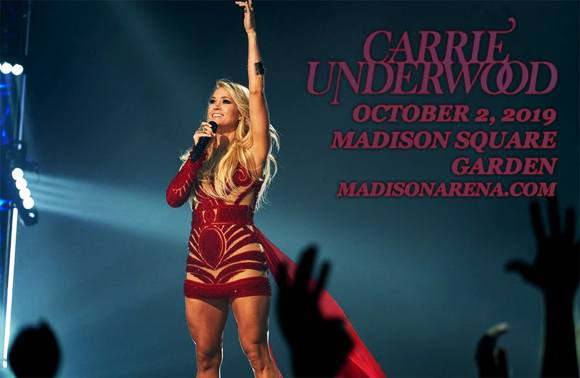 Originally finding fame as the winner of the fourth season of American Idol in 2005, Carrie Underwood is now one of the world's most successful female vocalists and country singers, having sold over 65 million records worldwide. The top country artist of all-time on the RIAA's Digital Singles ranking and the highest certified country album artist to debut in the 21st century, Underwood is the only solo country artist in the 2000s to have a number-one hit on the Billboard Hot 100, the only country artist to debut at number one on the Hot 100 and, with fifteen number-one hits on the Billboard Country Airplay chart, she is the most successful female artist in the history of the chart. Her debut 2005 album, Some Hearts, was named by Billboard as the number-one country album of the 2000s and she was the top female artist on their 'Best Country Artists of the 2000s' list. Underwood has been inducted into the Hollywood Walk of Fame, Grand Ole Opry, Oklahoma Hall of Fame, and Oklahoma Music Hall of Fame and has received many awards and accolades throughout her career, including seven Grammy Awards, ten Billboard Music Awards, fourteen ACM Awards, thirteen American Music Awards, eight CMA Awards, and a Guinness World Record.