Renowned Australian worship band Hillsong United comes to Madison Square Garden on Tuesday 2nd July 2019 as part of their 2019 US Tour! A night of praise, worship and fellowship, Hillsong United is bringing brand new material to connect the congregation:

“It’s been a few years since we have toured North America – we have a lot of music not yet road tested and can’t wait to be with you and sing these songs," said Hillsong UNITED. "We have been working hard on a brand new experience and can’t wait to have our friends Amanda and Mack with us!”

The show will also feature Amanda Lindsey Cook and Mack Brock in support! 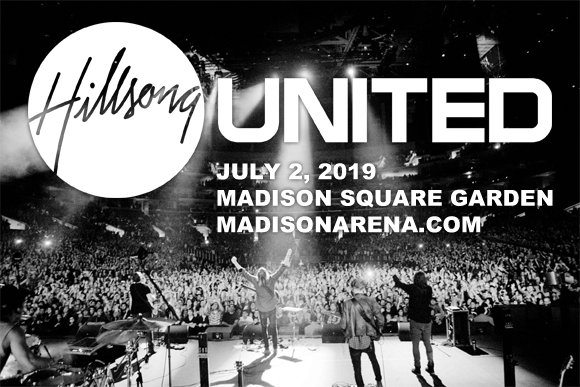 Formed in Sydney, Australia in 1998 as part of Hillsong Church's youth ministry, Hillsong United is an Australian worship group consisting of several rotating worship leaders from the church, including Grammy Award-winning songwriter Brooke Fraser, Joel Houston, Reuben Morgan and Marty Sampson. Following the advice of renowned Hillsong worship leader Darlene Zschech, the group recorded its debut EP, One, that year and released it alongside the Hillsong Worship album Touching Heaven Changing Earth. To date, they have released eleven annual live albums and four studio albums. The collective has won eight Dove Awards and the Billboard Music Award for Top Christian Artist, and has received to American Music Awards nominations.