A man of phenomenal talent, multi-award-winning Hollywood actor and Broadway star Hugh Jackman comes to Madison Square Garden on Saturday 29th June 2019 for the second night in a row in The Man. The Show. The Music. – his standout one-man arena tour! Jackman will be performing songs from the smash hit musicals Oklahoma!, The Boy from Oz, Les Miserables, The Greatest Showman and more, interspersed with fascinating and hilarious anecdotes from his time on the stage! Tickets available now! 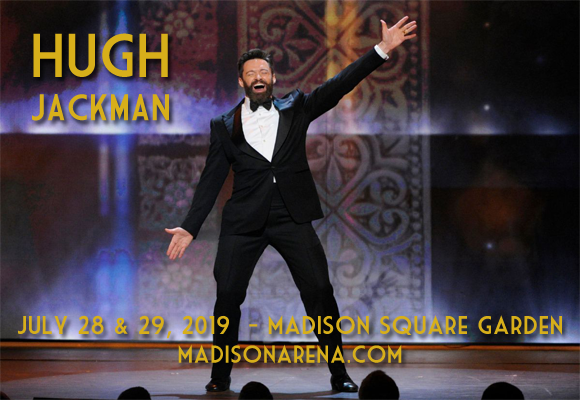 Best known for his role as Wolverine in the X-Men films, Hugh Jackman is an Australian actor, singer, and producer. Jackman began his acting career in the 10-part Australian ABC TV series Correlli, landing the role in 1994 on the day of his graduation from Western Australian Academy of Performing Arts of Edith Cowan University in Perth, Western Australia. After Correlli finished, Jackman branched out into stage acting in Melbourne, and in 1998 he was cast in the lead role of Curly in the Royal National Theatre's acclaimed stage production of Oklahoma! in London's West End – a role that introduced Jackman to an international audience. Two years later, he had his mainstream breakthrough in Bryan Singer's X-Men, which led him to be a sought-after Hollywood star. Throughout his career, Jackman has taken on a wide variety of notable roles in many different genres of film, including: Kate & Leopold (2001), Van Helsing (2004), The Prestige (2006), The Fountain (2006), Australia(2008), Les Misérables (2012), Prisoners (2013), and The Greatest Showman (2017). A highly-awarded performer, Jackman has received a Tony Award, an Emmy Award and a Golden Globe Award, and has been nominated for an Academy Award and a Grammy Award.