It's the good news we've been waiting on for 6 YEARS… The Jonas Brothers have reformed, and they're back with a brand new tour and album! Coming to Madison Square Garden on Thursday 29th August 2019, the pop rock trio will be performing brand new tracks like “Cool” and “Sucker”, as well as plenty of Jonas Brothers classics for the fans! It's gonna be huge!!! 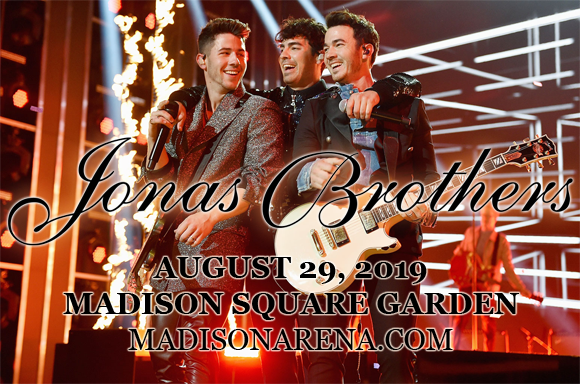 Sibling pop rock trio Jonas Brothers was formed in 2005 by Joe, Kevin and Nick Jonas. After releasing their debut album, It's About Time, in 2006, the band found fame with their self-titled second studio album, which was released in 2007 and debuted at number five on the Billboard 200. The following year, the group began a long and successful collaboration with Disney, starring in the 2008 film Camp Rock, as well as contributing to the film's soundtrack, as they did for the sequel Camp Rock 2: The Final Jam (2010). 2008 also saw the release of their third studio album, A Little Bit Longer, and that same year they were nominated for the Best New Artist award at the 51st Grammy Awards and won the award for Breakthrough Artist at the American Music Awards. The band's fourth studio album, Lines, Vines and Trying Times, was released in 2009, debuting at number one on the Billboard 200. From 2010 – 2011, the band were on hiatus to focus on individual ventures, but despite reconvening in 2012, Jonas Brothers officially disbanded in 2013. In February 2019, the group reformed, and in June they will release their long-awaited fifth studio album.