Can't Fight The Feeling of pure joy when one of pop music's smoothest movers, Justin Timberlake, takes to the stage! Timberlake comes to Madison Square Garden on Wednesday 24th October 2018 on his incredible Man of the Woods Tour, which has been wowing people all over the nation! A perfect blend of JT's classic hits, impeccable choreography and a stripped down, campfire-style singalong section, the Man of the Woods Tour is a spectacle that's not to be missed! 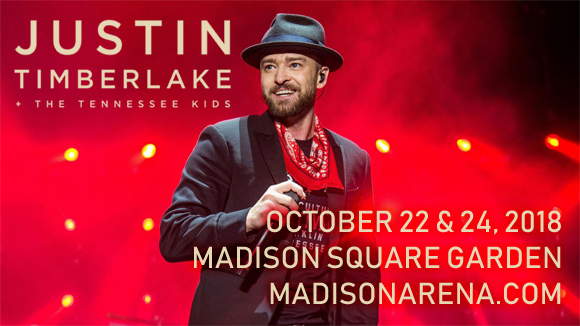 Justin Timberlake is an American singer-songwriter, actor, dancer, and record producer who rose to fame as a member of the boyband NSYNC in the 1990s, before becoming a successful solo artist. Timberlake began his career in childhood, appearing on the television shows Star Search and The All-New Mickey Mouse Club (alongside Britney Spears, Christina Aguilera, JC Chazes, Ryan Gosling and Kerri Russell). In 1996, NSYNC was formed and, with Timberlake performing as one of the band's two lead singers, the group became one of the best-selling boy bands of all time. The group disbanded in 2002 and Timberlake released his debut solo album, Justified, the same year, debuting at number two on the Billboard 200 and launching the singles "Cry Me a River" and "Rock Your Body", earning him his first two Grammy Awards. Timberlake has continued to be an eminently successful solo artist, with sales of over 32 million albums and 56 million singles globally, and four number-one albums to his name. He has won ten Grammy Awards, four Emmy Awards, three Brit Awards, and nine Billboard Music Awards, and is officially one of the world's best-selling music artists. Timberlake has twice been named by Time as one of the one hundred most influential people in the world (2007, 2013).