Lauren Daigle plays her biggest show yet at Madison Square Garden on Thursday 25th June 2020 on her debut arena tour! The multi-platinum-selling Christian artist will be performing songs from her Grammy Award-winning album, Look Up, Child, and she'll be joined by Christian folk duo Johnnyswim in support!

"Let me tell y'all," she said of playing Madison Square Garden, "I'm freaking out."

“I love putting out a vibe where people are free to respond however they feel and where people feel like a warm welcome, where they can have a good laugh and let go of some of the things they have been holding on to through the stress of family or work or whatever. It’s going to be lively and fun and cheerful as well as emotionally connected.” 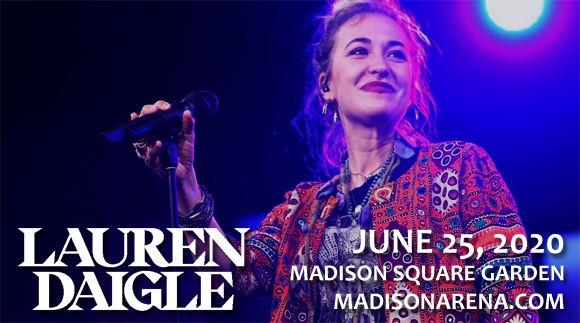 Lauren Daigle is a rare talent, who has found critical and commercial success in both the Christian and secular music markets. The CCM singer-songwriter's first taste of fame was as a contestant on American Idol in 2012, but it was her debut solo album, How Can It Be (2015), that put her on the map. The album debuted at number one on the Billboard Christian Albums Chart and reached number 17 on the Digital Albums Chart, and number 28 on the Hot 100, gaining platinum certification from the RIAA. It also launched three singles that hit the top spot on the Billboard Christian Airplay Chart: "First", "Trust in You" and "O Lord". In 2018, Daigle released her second studio album, Look Up, Child. The album proved to be an even bigger success for Daigle, entering the Top Christian Albums chart and number one, and the Billboard 200 chart at number three, making it the highest-charting Christian album by a woman in over 20 years. At the 2019 Grammy Awards, it won the award for Best Contemporary Christian Music Album, and "You Say", its lead single, won the award for Best Contemporary Christian Music Song. Daigle has also won seven GMA Dove Awards, two Billboard Music Awards and two American Music Awards, and she has charted four number one singles on both the Billboard Christian Airplay and Hot Christian Songs chart.