One of the most critically and commercially successful artists of all time, Mark Knopfler, comes to Madison Square Garden on Wednesday 25th September 2019! The world-famous singer, songwriter, guitarist, record producer and former Dire Straights frontman will be performing from his recently released ninth studio album, Down the Road Wherever, and will also delight fans with a few of the classic hits that brought him to where he is today! An international icon at an internationally iconic venue – it's a match made in heaven! 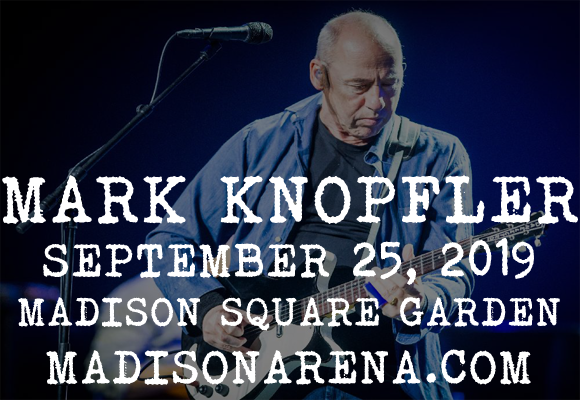 Mark Knopfler rose to fame as the lead guitarist, lead singer, and songwriter for the rock band Dire Straits, before finding further success as a solo artist. Knopfler enjoyed a string of international hit singles with Dire Straights throughout the 1980s, including "Romeo and Juliet" (1981), "Private Investigations" (1982), "Twisting by the Pool" (1983), "Money for Nothing" (1985), and "Walk of Life" (1985), and during their time as a band (they were active from 1977 to 1988, and again from 1991 to 1995) they became one of the world's best-selling acts, with sales of over 100 million. As a solo artist, Knopfler has charted several hit singles and released nine studio albums, as well as receiving several awards and accolades, including  the Edison Award, the Steiger Award, the Ivor Novello Award, and four Grammy Awards, as well as three honorary doctorate degrees in music from universities in the United Kingdom. As a member of Dire Straights, he was inducted into the Rock and Roll Hall of Fame in 2018, and in 2000 he was the Order of British Empire by Queen Elizabeth II for his services to music.