Chart-topping, multi-platinum-selling rapper Post Malone is headed to Madison Square Garden on Monday 14th October 2019 for two nights in a row! The Grammy-nominated hip hop artist has been keeping it fire since the release of his sophomore album, Beerbongs and Bentleys, last year and although there's no talk of his next album just yet, with tracks like "Sunflower", "Wow" and "Goodbyes", he looks set to continue his reign as one of hip hop's most popular modern voices! He'll be joined by Swae Lee and Tyla Yaweh in support! 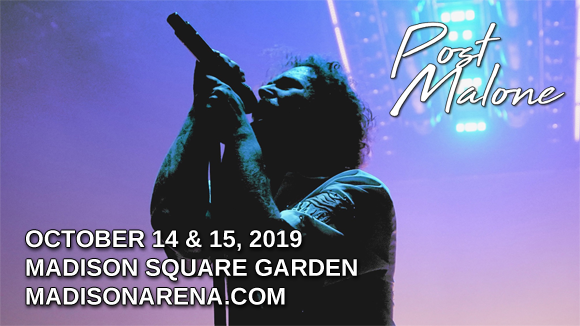 Post Malone became an overnight sensation in 2015 when he released his debut single "White Iverson", which peaked in the top 20 of the Billboard 200 and earned him a record deal with Republic Records within a month of release. He followed with his debut album, Stoney, in 2016, which peaked at number four on the US Billboard 200 and was eventually certified triple platinum. The album launched several hit singles, including "Congratulations", which was certified diamond by the RIAA. Beerbongs & Bentleys (2018), his follow-up, debuted at number one on the Billboard 200, and broke several streaming records upon release, as well as launching the number-one singles "Rockstar" and "Psycho". The album was nominated for four awards at the 61st Grammy Awards, including awards for Album of the Year and Record of the Year.