One of the highest-achieving bands of all time, Queen, come to Madison Square Garden on Tuesday 6th August 2019, fronted by vocalist Adam Lambert, on the Rhapsody Tour! The iconic British band, who were immortalized in the record-breaking biopic Bohemian Rhapsody last year, are excited to bring their tour to America and present their iconic songs to fans in this brand new, breathtaking show:

Adam Lambert said: “We have been designing a brand new visual spectacle that will reframe these iconic songs and we are excited to unveil it!” 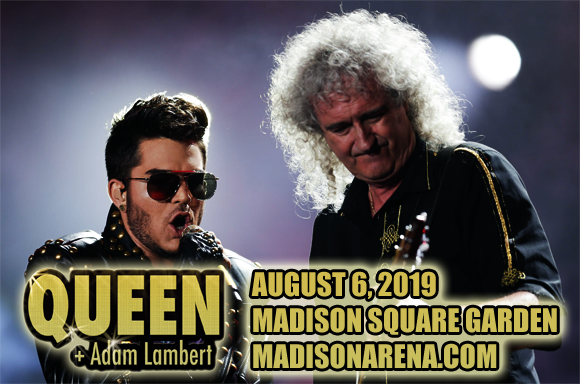 British rock band Queen formed in London in 1970 and is best known for its  classic line-up of Freddie Mercury (lead vocals and piano), Brian May (lead guitar and vocals), Roger Taylor (drums and vocals), and John Deacon (bass guitar). The group's self-titled debut was released in 1973, and they found chart success in the UK with their second album, Queen II, but it was their third and fourth albums, Sheer Heart Attack (1974) and A Night at the Opera (1975) that brought the band international fame. A Night at the Opera (1975) launched their signature song, "Bohemian Rhapsody", which stayed at number one in the UK for nine weeks and also helped to popularise the music video. By the 1980s, Queen was one of the biggest stadium rock bands in the world – their 1981 Greatest Hits album is the best-selling album in the UK, it has been certified eight-times platinum by the RIAA and is one of the best-selling records of all time, and their performance at the 1985 Live Aid concert has been ranked as the greatest rock performance of all time. Queen's album sales are estimated to be between 170 million to 300 million records, making them one of the world's best-selling music artists. They have received many awards and accolades throughout their career, including the Outstanding Contribution to British Music Award from the British Phonographic Industry, the Ivor Novello Award for Outstanding Song Collection from the British Academy of Songwriters, Composers, and Authors, the Grammy Lifetime Achievement Award, and inductions into the Rock and Roll Hall of Fame and the Songwriters Hall of Fame. The band is currently fronted by American singer Adam Lambert.