Controversial hit-maker Tyler The Creator comes to Madison Square Garden on Thursday 12th September 2019 in support of his hot new, number one album, Igor! The album, which features collaborations with Kanye West, Playboi Carti, Solange, Lil Uzi Vert, Pharrell Williams, Charlie Wilson, and Santigold is widely regarded as some of his best work and fans have the chance to see it live at one of the world's most prestigious venues! He'll be joined by Blood Orange, Jaden Smith, and Goldlink in support! 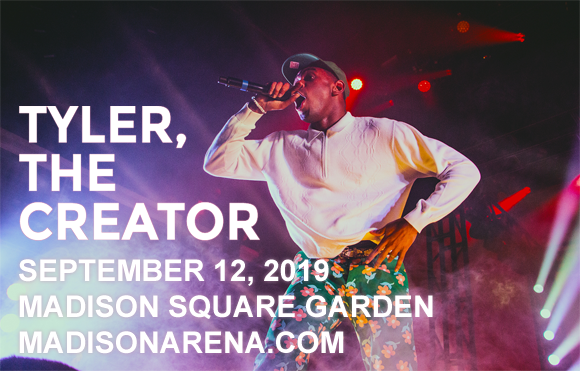 Tyler, the Creator first made waves in the hip hop scene back in 2006 when he founded the hip hop collective Odd Future with Left Brain, Hodgy Beats and Jasper Dolphin. The American rapper, record producer, and music video director released a mixtape with the group in 2008, before embarking upon a solo career the following year with the release of his debut solo mixtape, Bastard. 2011 saw him release his debut studio album, Goblin, with XL Recordings, debuting at number five on the Billboard 200 chart and launching the single “Yonkers”. The song's video won the MTV Video Music Award for Best New Artist at the 2011 MTV Video Music Awards, and the album's success led to a joint deal for Tyler and his label, Odd Future Records, with RED Distribution and Sony Music Entertainment. All four of Tyler, the Creator's studio albums have peaked in the top five of the Billboard 200, including his recent number one album, Igor (2019).